What I Learned on the River this Week - Episode #5

It's been a while since I have posted a "What I learned."  I guess the weekly idea was a bit of a stretch.  Life does get busy from time to time, and this past month it has come in the form of a couple good sized custom orders that this part time fly tier had to devote a lot of time to.   I simply didn't have time to fish but this week that changed.  I only made it out on the water once but it was a very good outing that once again taught me a few valuable lessons.  The lesson for me on this trip was improvisation.  Or you could say it was more about preparation, depending on your perspective I guess.

This week I took advantage of the early morning light and fished my favorite time of the day.  I happen to work a half hour from a very nice tailwater, that holds plenty of nice Browns, and a few fat Rainbows.  That gives me the opportunity to hit the river in short bursts through the year, either before work, or even an hour or two in the middle of the work day.  As an early riser my favorite time to fish is the first couple hours of daylight.  It helps get the day off on the right foot I guess you could say.  The river is usually empty of fishermen this time of day, giving me the freedom to explore any water I would like rather than simply looking for an open run.  The morning air is often about as calm and free of wind as you will ever see it, and to top it off there are a lot of fish that take advantage of this time of day to feed on the surface.  On the river I fish, the trout are usually up on midges, or some sort of mayfly spinner depending on what the seasonal hatch is at this early hour.  In the late summer and fall, there are tricos hatching as well and often, even though the hoppers usually sleep in until the sun hits them and warms up their cold blood, dead drifting a hopper over early morning fish also works well in those late summer months.  This time of year though I was expecting fish to either be up on midges, or possibly a spinner pattern if there were scraps on the water from an earlier BWO Spinner fall.  But what I expected was not quite what I found.

A few fish were up feeding on this late April Morning, but not as many as I find later in the year.  This is the earliest in the year I have tried to make the early morning shift on the river before I head into work at 8.  It was a feeling out process for sure.  You can try and be prepared for anything, but at the end of the day, you will probably run up against fish feeding on something that you simply were not ready for, and don't have a specific pattern to match.  On this morning the few surface feeding fish I did see in this run were all as tight to the bank as you can get.  Feeding right up under overhanging branches.   To make matters tougher, the feeds were sparse, and erratic.  Just by watching their actions it seemed these fish were feeding on something very specific, and something that wasn't overly plentiful on the water.

In examining the surface of the river as it swirled around my waders I didn't see anything that grabbed my attention.  I did see a few midge pupa drifting by just under the surface, and even a few adults riding the currents, but not a lot, and this made sense in my mind as it related to these fishes feeding pattern.  I tied on a midge emerger pattern (Harrops Transitional Midge-I don't always fish my own patterns, and a House of Harrop pattern is always a good bet) and got nothing out of the fish.   I tired a CDC Bubbleback midge pattern and still nothing.  These fish were obviously eating something off the surface as I could clearly see their snouts rise up as they ate.   I didn't think they were taking midge pupa just under the surface so I wondered if there were a few spinners on the water that I wasn't seeing.  I tied on a small CDC Rusty Spinner, and received the same treatment from the trout.  No response.  I was getting a bit frustrated knowing these fish were looking for something specific that I hadn't shown them yet.  So I stopped and took another good hard look at the rivers surface.

There I noticed something that I had been missing but that made even more sense as I considered the fact that each fish I had spotted rising was hugging tight to the bank, often under limbs and along rocks.  Ants.  Quite a few very small black ants, in fact, were drifting in the current.  The only problem...I had not been prepared for them, and had not a single ant pattern on me this morning.  It was time to improvise.  The smallest black bodied pattern I had in my box was a Trico spinner pattern with CDC wings.  I looked at it on the water and noticed the CDC fibers did a pretty good job if I spread them out and clipped them a bit shorter of mimicking the impression of the ants legs.  This pattern also rode low in the water just as an ant does.  I clipped the tail fibers, trimmed the wing, and splayed it out along the body a bit, and went to work with my on the fly "ant" pattern.

The first cast I made was to a stubborn fish feeding just off a bank side boulder.  It's nose would literally rise so close to the boulder I could not see any space between it and the rock as it dimpled the surface.  The cast hooked perfectly from my position around the boulder so it would flow right against the far side and around and down the exact feeding lane of the fish.  I could not even see my fly as it went around the backside of the boulder, then suddenly I saw some rise rings come from behind the big rock.  It looked like the fish had moved up to take my fly while it was out of sight so I gently brought the rod up, and sure enough felt the pull of the fooled trout.  My Trico/Ant had worked.

Moving up the bank I was able to pick off a few more fish on my improvised ant pattern and call the morning a success, heading back to the office with a smile on my face.  While being prepared and having a few ant patterns in my box would have been ideal, there are often ways of dealing with situations like this by looking at your current fly box a little creatively. 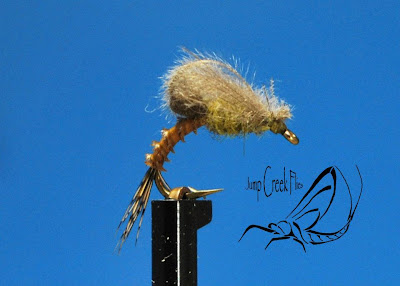 I wanted to share a picture of the BWO version of the CDC Bubbleback Emerger you will now find in the Dry Fly section of the online catalog.  This version has been for sale for a while there, but it had been a bit hard to find.  Now it has it's own picture and listing on the page.

This little pattern has quickly become my favorite dry fly for fussy trout picking on BWO Emergers, Cripples and Stillborn bugs.  I use it early when the fish are first starting to rise, and I will use it late in the hatch or even after the hatch has subsided when a few fish are still up in the more protected lies, sipping those cripples that never made it off the water.  It is fished with only the front of the fly riding on top of the water.  The CDC bubble floats that part of the fly.  I use a powdered desiccant such as Frogs Fanny on the Bubble and the dubbing under that bubble, but leave the rest of the fly untreated so it hangs below the surface of the water.

Feel free to ask any questions you may have on fishing this or any of my patterns.  **Click here**