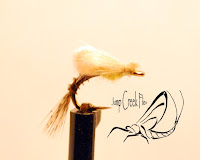 Have you ever had one of those outings where fish were rising all around you, obviously feeding on something at or near the surface, but have all your best dry fly offerings refused? The answer to this frustration is most likely emergers. Fish love to key in on these mayflies in the midst of their transformation from Nymph to Dun as they struggle in this vulnerable position. Half hatched and not yet able to fly, they make an easy target for hungry fish.

My favorite early stage emerger in these cases is the above pictured CDC Bubble Emerger. It fishes well early in a hatch when fish are just beginning to show themselves on the half hatched mayflies, and it works great later in the hatch when you catch those lazy slurpers feeding along the banks, eddies, and in current seams where crippled and stillborn mayflies that were unable to leave the water are pushed by the current. This pattern fills a very nice hole in the arsenal between the nymph(Marabou Nymph) and the late emerger, and dun stages (BS Sparkle Dun).
No comments: