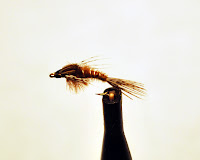 The next addition to the catalog is this versatile nymph pattern.  This fly is tied on a 3x long shank hook so I tie it in smaller sizes which correspond to the more common size of natural insects in the water.  This fly has all the subtleties that draw the fish and help it stand out from the usual dose of pheasant tail nymphs those fish in highly pressured water see every day.  It's marabou wrapped body gently tapers without adding too much bulk and the thin fibers provide a lot of action in the water giving the fish the impression of life. I have never fished a more effective nymph.
The fly can be fished many ways.  It works great as a dropper in a hopper/dropper set up.  I often fish it in as my bottom fly in a multi-fly nymph set up, or it can even be swung like a wet fly.
This fly is tied to mimic a mayfly nymph but I recall one day fishing it in a slow pool using it as the bottom fly in a double nymph rig while dredging the bottom of the water column.  I was having good luck with several fish to hand when just like that a caddis emergence got underway and the fish were up and down this pool rising with those quick splashy rises that they often will do with emerging caddis.  As luck would have it I needed to leave in a few minutes and I didn't want to take the time to rerig from my double nymph set up to the wet fly I would normally use on the swing in this case.  Instead I simply removed my strike indicator, and split shot and began swinging this nymph through the pool.  Sure enough on nearly every cast the fish were hitting it hard.  The last 10 minutes I had on the water that day were fast and furious as the fish attacked this fly with reckless abandon.
Since that day I have come to rely on this nymph as one of my go to patterns during a caddis emergence and it has continually produced in a capacity it was never meant to work under.  It's always a bonus when you get a fly that is not only extremely effective, but is versatile and can mimic more than one insect.
If you ever have any questions about the patterns here just shoot me a comment or an e-mail.  Now get that fly box stocked up because winter is on the downward slope!