Fishing has slowed just a bit here in the last month or so, but there are still fish out there willing to take an artificial fly.  When fishing highly pressured trout streams in the late summer I have found that you just need to poke your fly into those little nooks and crannies that are overlooked by the bulk of fishermen.

The tailwater river I fish on a regular basis gets a lot of traffic, and it was about a week and a half ago I really noticed a shift in the way the fish were eating my grasshopper immitations.  They still take a look, they will still eat, they are just a lot more cautious in this act.  And they don't mash the hopper like they did a few weeks ago.  Many fish I was taking two weeks ago I was hooking deep in the corner of their jaw, or even in the back of their throat as they really committed to eating the big bug.    As they have been stung by the hook a few too many times these last couple weeks I have noticed many more false rises, false takes, fish that come loose after a couple headshakes, and even the fish I do bring to the net seem to be hooked just in the edge of the lips.  Never the less the fish are there and they are eating, just much more cautiously, so a bit more patience is required on the anglers part.

At times like this you still should been able to go out and have some good success but the willing fish are not going to be in the same places you were catching them before.  Don't get me wrong, the fish are still in those obvious places everyone and their dog throws a fly into, but the fish there are going to be extremely careful right now.

As an example I have a favorite run that three weeks ago yielded one of my best mornings fishing hoppers ever.  It is an obvious spot that gets a lot of pressure for several reasons.  One, it is right off the road.  Two the near bank is relatively shallow and easy to wade, and three, there are always fish rising here.  I picked off six big fish on six casts, in the span of about 10 minutes on an amazing Friday morning at the beginning of this month.  All six fish were spotted rising along the roadside bank before I casted to them.  All six fish took the fly hard and deep making it easy to bring them in without fear of losing the fish.  It was a great little span and a morning I won't soon forget. 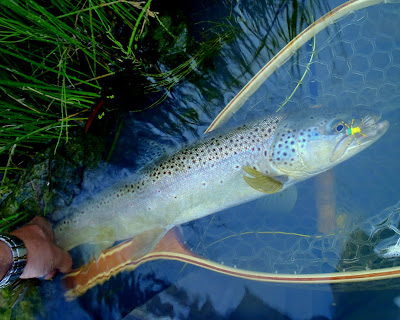 But just a couple weeks later I fished that same run with no luck.  Every little lie I had seen and caught a fish out of last time still had a fish visibly rising in it, but they were not going to fall for the hopper trick.  As I moved fishless up the run this week having multiple looks, but no takes I was wondering if the whole river had become educated on foam hoppers and I was going to have to shift my strategy a bit.  While I welcome the challenge, I was a little disappointed.  Then on a whim I decided to cross the river and fish the other bank.  Now this is what I am talking about when I say be willing to look in the not so obvious spots when the fish get lockjaw.  Their was a fairly deep channel I had to cross to get to that side that would have kept slightly more cautious waders from fishing that side much, and quite frankly the water did not look that fishy.  It was shallow, 5-10 inches in most spots, and slow moving.  However as you looked at this bank carefully you could pick a few spots that could hold a fish or two.

The first of these was a simple little slick where the water flowed off the edge of a small brushpile.  Here the water was more on the 5 inch deep side than 10.  Not much water, but I could see that the way the current flowed there was the opportunity for food to be caught in the little eddy behind the brush pile, then as it got pushed out it would funnel right off the edge of the currents seam flowing off the brush.  I made the cast, and watched the fly pick up speed as it hit the faster current in the seam and drop into the "hole" where I hoped a fish would lie.  Sure enough a big snout rose up and engulfed the fly as if on cue.  And this was not a soft take.   A few moments later a nice 20 inch fish slid into the net.  Don't be afraid of shallow water.  Big fish can lie in some surprisingly shallow lies. 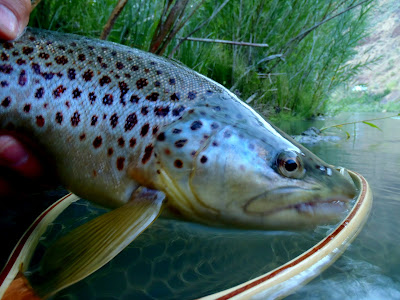 I continued down the run and found another little nook that I thought would possibly hold a fish.  It was a tough lie, but the current cut back into the bank a bit here and the depth of the river changed a few inches while overhead willows hung over the water offering great protection, and just down stream there were dead willow branches in the water.  These dead branches caused the current to slow just enough that I could see any drifting food getting hung up here a bit, and an opportunistic trout lying in wait.  The problem with the lie is that it is basically a one and done deal.  It was a shoe box sized area, and if you let it drift any further than that little window your fly would surely become one with the dead willow branches in the water.  So in such a small area I would be forced to rip my fly out of there while still in an area that any fish that was there would surely be spooked. 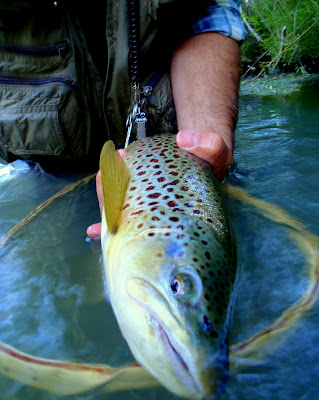 I lined up the cast and dropped it just ahead of the target, and watched it drift into the sweet spot and just as I suspected, because of the current the hopper slowed up and swirled just a bit before continuing tight to the bank.  Precious inches passed in slow motion as I watched the bug near the end of its narrow window of opportunity and I was preparing for the quick rip that was going to be necessary to haul my fly out of danger as it approached the dead willows.  I bravely watched as the fly curled just around the first branch, and figured it was over, no fish.  But just as I started to take up the line the skinny water exploded and a fat 21 inch buttery Brown attacked the hapless hopper.

As I continued down the bank each small potential lie held similar fish who were far less shy about taking the big fly than their comrades across the current, and what had started out as a morning of frustration ended up being one of my better mornings on the water.

So when fish get tight lipped, first try the other side of the river so to speak, away from where the highest pressure is going to be, and then pay attention to reading the smallest details of the water.  Really look for those smaller lies that may only hold one or two fish, but where fish that are tired of being hammered while eating in the obvious spots will go to find refuge.  It's always rewarding to pull that big fish out of a less than obvious spot.